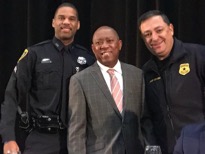 AAPOL held the General Meeting on Tuesday, February 20, 2018 and was graced with special guest to speak in regards to upcoming elections. The following candidates spoke at the meeting:

WHAT DOES EARLY VOTING BY PERSONAL APPEARANCE MEAN?

Early Voting By Personal Appearance means that a registered voter in Texas may vote prior to General Election Day during a period designated by state law.

WHEN DOES EARLY VOTING BY PERSONAL APPEARANCE TAKE PLACE?

WHERE CAN A REGISTERED VOTER IN HARRIS COUNTY VOTE DURING THE EARLY VOTING PERIOD?
Any qualified voter may vote in person at the main early voting polling place or at any other designated early voting branch location during designated times. Usually, there are numerous early voting locations in Harris County during the conduct of a countywide election.

I would like to thank the AAPOL members for the support and dedication to the organization.  The February General Meeting was successful with attendance and participation of all events.   I’m requesting that we as an organization continue to reach out to others in getting more officers to become members.

In the near future, the AAPOL Board will discuss relocating our headquarters back to Griggs Rd. with the intent to make it more convenient for members to attend meetings and be more present in the community.

Again, I would like to thank the members for the support, Chief Acevedo for backing AAPOL’s initiatives and Executive Chief Finner for his guidance.  Let’s continue to make the African American Police Officers’ League great!

AAPOL was founded in 1975 under the leadership and guidance of Houston Police Officer Alvin V. Young (dec.). Officer Young worked tirelessly as a liaison between the department and the community it serves and today AAPOL remains active in police and community affairs.