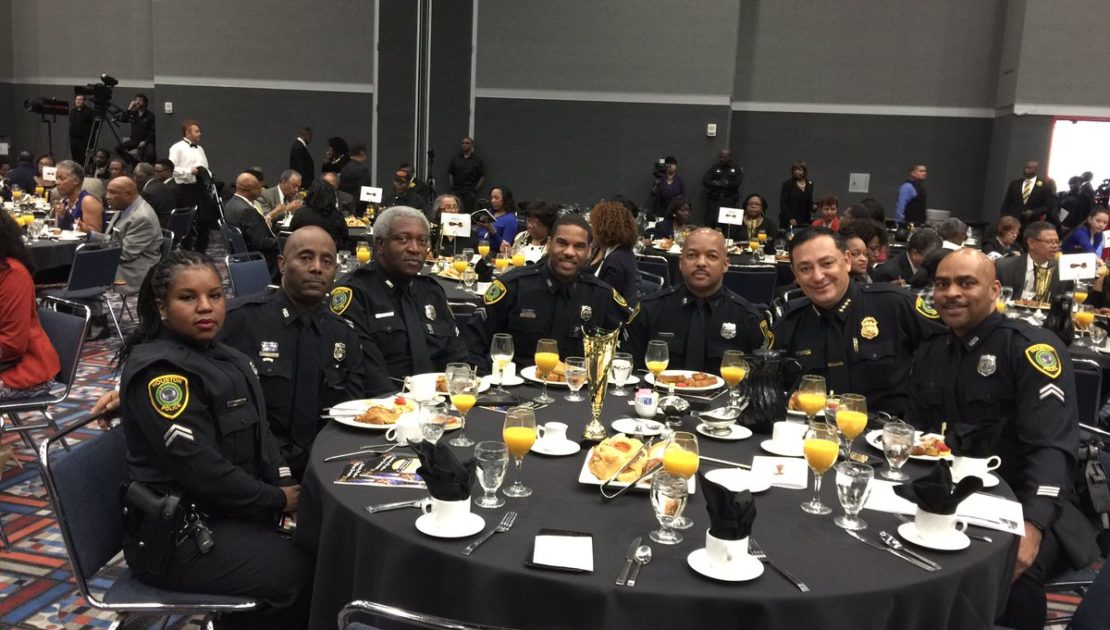 Formerly known as North Houston Frontiers Club, the Greater Houston Frontiers Club, Inc. (GHFC) is a non-profit, 501(c) (3), service organization, dedicated to providing educational and monetary assistance to talented, deserving high school seniors in the greater Houston’s Harris County. The Greater Houston Frontiers Club’s membership is composed of a diverse group of men and women volunteers, no paid staff, who are determined to transforms the lives of the local high school students. With the help from individuals, foundation, grantors, and corporations, we have grown into one of the oldest, and most effective international service organizations with chapters throughout the world.

The Greater Houston Frontiers Club is just one of several chapters of the Frontiers International, Inc. originally called Frontiers of America.  The Club was founded in Columbus Ohio, on November 10, 1936 by Nimrod B. Allen, a former Executive Director of the Akron YMCA and a well-known leader in the African community. The primary purpose of the organization was to provide an outlet and opportunity for African American males, to collectively give service to their communities through a civic, service leadership organization that did not discriminate against them, as was custom of other organizations at that time. On December 24, 1938, the name was changed to The Frontiers International and was also incorporated in Ohio .In the early days, Frontiers International was very instrumental in setting a platform for local politicians to speak to the African-American community. The club did not endorse candidates, but welcomed them to speak to the group. Contrary to the foundation on which the organization was founded, after hearing Dr. Martin Luther King, Jr., the Frontiers International Club began to base its mission and values on the outstanding philosophy of Dr. Martin Luther King, Jr.’s concept of service. He believed that a person’s worth should not be measured by his or her color, culture, or class but rather by his or her commitment to making a better life for all. King said, “We must work increasingly to uplift this nation that we love to a higher destiny, to a higher plateau, to a

more noble expression of humanness.” As he once said, “Everybody can be great, because everybody can serve.’’ The Frontiers International also began to open its membership to both men and women interested in service, establishing ‘Service to the Community’ as the overall theme of the Frontiers.

Founded in 1993, Assist the Officer (ATO) is a tax-exempt, non-profit organization under the provisions of the Internal Revenue Code 501(c)3, providing short-term, immediate need financial assistance to peace officers in the Greater Houston area critically injured or disabled in the line of duty. Assist the Officer serves to provides programs to fulfill an immediate need including:

Law enforcement officers serve and protect our communities. It is an unfortunate reality that many of these officers face work-related risks with the potential for injury on a daily basis. When an injury occurs, it can often times be financially catastrophic especially if they are the sole provider for their family. During their time of recovery, the last thing an officer should have to worry about is how he or she will make ends meet while recuperating.

ATO Houston held its first Annual Top Cop Gala. AAPOL and HPOU were two of several organizations that helped sponsor the event. Thanks to everyone

who came out, including some of our AAPOL members:

The “Choose Respect” teen workshop facilitated by the Houston Metropolitan Chapter of Delta Sigma Theta educated our young people on the red flags and dangers of unhealthy relationships; the laws and how to access resources. Det. Monica Fortson of the Houston Police Department- Child Sexual Abuse Unit and AAPOL Board Member was the keynote speaker. The event was held on Saturday 2/17/2018 at Westbury High School Lecture Hall

President Eric Carr was invited to speak at the Trailblazers Community Symposium on February 23, 2018. There were amazing Community Trailblazers ranging from Doctors, entrepreneurs, ministers, real estate investors and business owners and more from the community committed to investing in the next generation. Students were very thankful and encourage.

Maya Angelou born Marguerite Annie Johnson; (April 4, 1928– May 28, 2014) was an American poet, singer, memoirist, and civil rights activist. She published seven autobiographies, three books of essays, several books of poetry, and was credited with a list of plays, movies, and television shows spanning over 50 years. She received dozens of awards and more than 50 honorary degrees. Angelou is best known for her series of seven autobiographies, which focus on her childhood and early adult experiences. The first, I Know Why the Caged Bird Sings (1969), tells of her life up to the age of 17 and brought her international recognition and acclaim.

She became a poet and writer after a series of occupations. She was an actor, writer, director, and producer of plays, movies, and public television programs.  In 1982, she was named the first Reynolds Professor of American Studies at Wake Forest University in Winston-Salem, North Carolina. She was active in the Civil Rights Movement and worked with Martin Luther King Jr. and Malcolm X. Beginning in the 1990s, she made around 80 appearances a year on the lecture circuit, something she continued into her eighties. In 1993, Angelou recited her poem “On the Pulse of Morning” (1993) at President Bill Clinton‘s inauguration, making her the first poet to make an inaugural recitation since Robert Frost at the inauguration of John F. Kennedy in 1961.

AAPOL held the General Meeting on Tuesday, February 20, 2018 and was graced with special guest to speak in regards to upcoming elections. The following candidates spoke at the meeting:

WHAT DOES EARLY VOTING BY PERSONAL APPEARANCE MEAN?

Early Voting By Personal Appearance means that a registered voter in Texas may vote prior to General Election Day during a period designated by state law.

WHEN DOES EARLY VOTING BY PERSONAL APPEARANCE TAKE PLACE?

WHERE CAN A REGISTERED VOTER IN HARRIS COUNTY VOTE DURING THE EARLY VOTING PERIOD?
Any qualified voter may vote in person at the main early voting polling place or at any other designated early voting branch location during designated times. Usually, there are numerous early voting locations in Harris County during the conduct of a countywide election.

I would like to thank the AAPOL members for the support and dedication to the organization.  The February General Meeting was successful with attendance and participation of all events.   I’m requesting that we as an organization continue to reach out to others in getting more officers to become members.

In the near future, the AAPOL Board will discuss relocating our headquarters back to Griggs Rd. with the intent to make it more convenient for members to attend meetings and be more present in the community.

Again, I would like to thank the members for the support, Chief Acevedo for backing AAPOL’s initiatives and Executive Chief Finner for his guidance.  Let’s continue to make the African American Police Officers’ League great!

AAPOL was founded in 1975 under the leadership and guidance of Houston Police Officer Alvin V. Young (dec.). Officer Young worked tirelessly as a liaison between the department and the community it serves and today AAPOL remains active in police and community affairs.